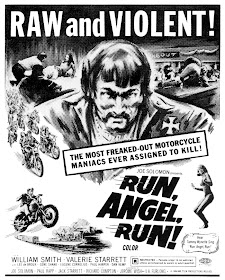 Hey there! I'll be at the Philadelphia Mausoleum of Contemporary Art on Friday, July 26 to introduce 16mm screenings of two movies starring William Smith and directed by Jack Starrett: RUN, ANGEL, RUN! (1969) and HOLLYWOOD MAN (1976). The show starts at 7:30 pm. The event site is here, the press release is below. I hope to see some of you there! -- Chris Poggiali

Exhumed Films, Philadelphia’s long-running genre film programmers, are teaming with Cinedelphia.com, the online center of Philadelphia’s film community, to present a monthly double-feature of rarely screened films. The series will be held on the final Friday of every month and will feature thematically-related movies projected on 16mm.

The ongoing series debuts on Friday, July 26 and will feature two films from director Jack Starrett and star William Smith: 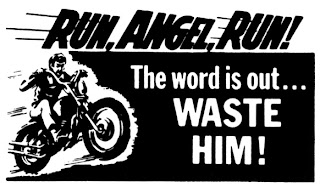 Motorcycle gang member Angel reveals the secret inner workings of his club to a journalist and is then forced to go on the run with his girlfriend in tow. Actor Jack Starrett’s directorial breakout hit and William Smith’s first role in a biker film, a genre that he would go on to dominate. 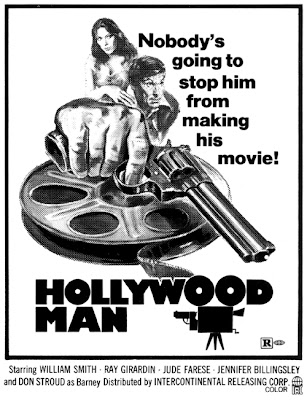 Smith stars as Rafe Stoker, a movie producer who gets mixed up with the mob while trying to raise completion funds for his new biker picture. Co-written by Smith, the film is a somewhat autobiographical tale of the toils and tribulations that come with working in the low-budget biker movie industry.